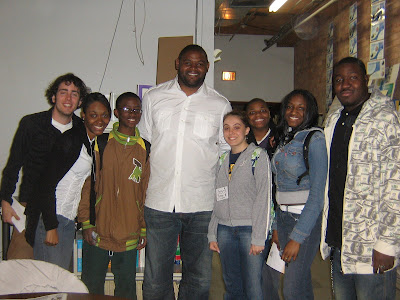 Who is the history of football has been so dominate that they named a block after them, the Pancake Block to be exact.... Orlando Pace! Sandusky, Ohio native, Orlando Pace battled traffic, the rain, and inaccurate directions as he made an effort to visit the Cabrini Connections' tutoring/mentoring session last evening!
For those who unfortunately don't know who Orlando Pace is, let me provide a little background. Orlando Pace was a 2 sport star (basketball and football) at Sandusky High School before going on to dominate the Big 10 at Ohio State University. After a few years of earning numerous awards, clearing the way for former NFL running back Eddie George, and being one of the only offensive linemen to be in the Heisman voting at Ohio State...Mr. Pace was the number 1 pick of the St. Louis Rams in the 1997 NFL draft. After a GREAT career with the Rams, filled with numerous Pro Bowl selections, Super Bowl championships, and other accomplishments, Orlando will begin is 13th season as a Chicago Bear! 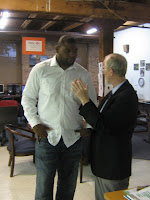 Orlando Pace took some time to meet the staff, talk poverty and the history of the program with President/CEO Dan Bassill, and just observe all of the great work the the mentors and mentees were doing during Wednesday night's tutoring/mentoring session. Mr. Pace tried not to be a distraction so that the pairs could stay focused on their work, but when you're 6'7'' 325lbs its a little hard to not catch the eye of the students, volunteers, and staff. 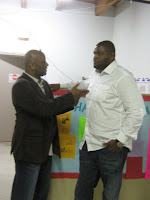 Orlando took a minute to speak with Chicago Tribune's Vaughn McClure as the group 'patiently' waited for their turn to meet Big O. Shortly after, we proceeded with our regularly scheduled announcements, and following the announcements I had to honor of introducing NFL great, future Hall of Famer, and one of my good friends...Mr. Orlando Pace. 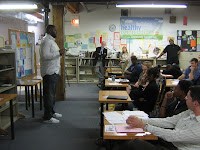 Orlando talked to the group about making the right decisions, taking advantage of opportunities that are available, the value of getting a great education, and valuing the opportunity to be a part of the Cabrini Connections' program. Orlando spoke very briefly about his success of being a football star, but he spoke more about how he developed a dream, worked towards that dream, and made the right decisions to obtain that dream of now being an NFL player. And he made it clear that every student in the Cabrini Connections' program can do the same, and that it starts with a dream!

When asked about his personal mentors, Orlando responded very similar to Tyrell Sutton (Green Bay Packer) who visited the program a couple of weeks ago, Orlando responded by saying that his mother was and continues to be his biggest supporter and mentor! Orlando ended the night by providing the students some words of encouragement for the upcoming summer and for life in general. Mr. Pace encouraged the students stay focused and to not take any time off this summer when it comes to working towards their goals, and encouraged the students to find something positive to do to avoid trouble. Orlando posed for pictures and signed autographs as the students celebrated the May birthdays before the group headed home for the night.