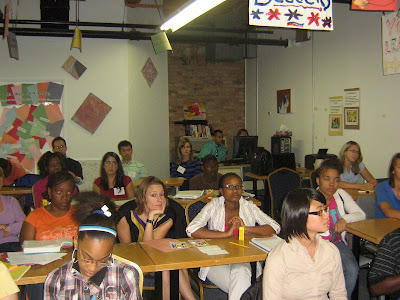 Nearly every team in the National Football League has a team that is considered a rival. The Cleveland Browns have the Pittsburgh Steelers, the Chicago Bears have the Green Bay Packers, and the Dallas Cowboys have the Washington Redskins etc... These are games where the players, coaches, fans, and entire cities prepare in one way or another for what is considered, by many, as the most important game of the season, regardless of what the team's records are. These games are so important that, some would say that, the word hate may be used periodically to describe the opponent.

Preparation for these games is a little different than the preparation for any other game. True, the practices, the film session, and individual workouts are very similar, but the emotions fueled by the history and importance of the rivalry game, creates more intensity, focus, and a desire to come out victorious!

The Cabrini Connections organization, from top to bottom, has been preparing for our rivalry game for nearly 8 months now. Our rival is not another tutoring/mentoring organization, the rival that we have been preparing for is the Chicago summer. Out of all of the opponents that our players, coaches, and the entire Cabrini Connections' organization faces throughout the season this is one of the biggest and baddest teams that we face. Their team is filled with nice weather, a lot of free time for the youth, drugs, gang activity, lack of jobs and positive outlets for the youth, and their worst players are gun violence and their MVP is murder.

For the last couple of seasons, the Cabrini Connections' team has come out victorious in this game, but each season the game gets even harder to win and their team gets even worse players. So we have to do what we always do, and that is stay focused on our goals, be determined, work hard, and prepare as much as possible to come out a winner by September.

And this is how we have been preparing our players. Throughout the season our players have been working on their commitment to the organization by attending the practices(tutoring/mentoring sessions) on time and often, our players have been taking advantage of many of the resources that the organization has to offer (job opportunities posted on the board), our veterans (seniors) and captains (Youth Leadership Council) have setting the standards for the younger players, and the coaches have been leading by example all season long.

But even with all that being said, it's going to take more to win this game. It's going to take continued effort from our players, coaches, and the organization...but its also going to take fan support. We need to not only pack the stands with our die-hard Cabrini Connections' fans, we are going to need resources from our fans and other supporters of the team. We need you to assist us with necessary funding needed to increase our resources such as supplies and maybe even another assistant coach, opportunities for our players such as summer jobs, we need our fans to promote this rivalry game and how important it is for our player's futures, and lastly we just need more financial support to keep our players, coaches, and the entire organization on a winning track.
Posted by EL Da' Sheon Nix on Monday, April 20, 2009