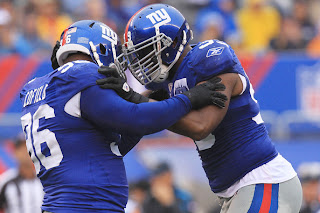 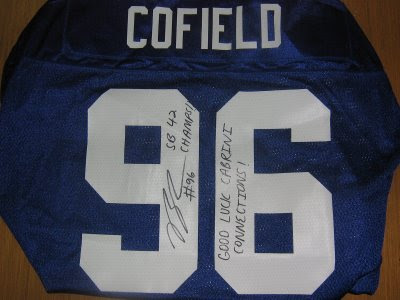 Mr. Cofield is a huge fan of youth and GIVING BACK to the community, and he has been a fan and supporter of the Cabrini Connections' program for several years now. In 2008 the Superbowl Champion Barry Cofield supported the Annual Golf Benefit by donating an autographed jersey to the silent action. And since that date, Barry has continued to follow highlights of the program and has continued to support the program in a variety of ways. After a recent visit to the program's facility in April, Mr. Cofield has since joined the Advisory Board and accepted a request to be the 2011 Golf Benefit Spokesman. Barry said, "I'm passionate about working with today's youth in order to make the future brighter, Cabrini Connections' is dedicated to the same goal and they are the best at what they do!" 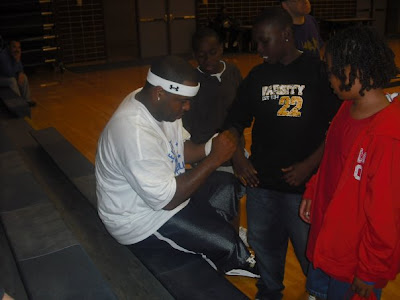 Barry Cofield at a Charity Basketball Game in Sandusky, OH. 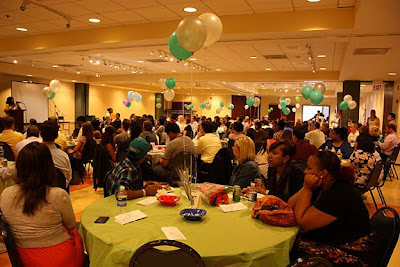 * 4 out of 5 seniors have been in the Cabrini Connections’ program for six years!

* Those same 4 seniors were also members of the Cabrini Green Tutoring Program and upon graduating from that program in the 6th grade they continued on with our program.

Check out this video of the seniors receiving their Graduation Dollars and yearbooks!

Class of 2011 from Cabrini Connections on Vimeo.

g right now! Hopefully EVERYBODY will take those positive feelings one step further and share with those in your network the impact that this program has on the lives of so many people. Tell them all about the RECORD BREAKING, AWARD WINNING, the ONE and ONLY Cabrini Connections' program!!! We are hopeful that they too will want to support the program as volunteers advocates, and/or a donors!!!

Moving beyond the past to the future

Tonight will be the annual year end dinner celebrating the work done at Cabrini Connections in the past year.

I won't be at tonight's dinner because I won't be officially part of Cabrini Connections after July 15. It's too painful for me to stand in front of you all asking for your help in making Cabrini Connections available to youth and volunteers for a coming year, when that call to action now will need to come from El Da'Sheon Nix and the Board of Directors.

If I were at the dinner I might want to talk about the history of the organization and show photos from the thousands that have been taken in the past 35 years. I might want to talk about what I've learned and why I've built a passion for the second part of Cabrini Connections, the Tutor/Mentor Connection. I would invite you to stay connected to me and to the information and ideas that I'm sharing on my blog and this web site.

I've received numerous awards and recognition over the past 35 years.

None have been more important to me than hearing the success of our teens and seeing the interaction they and volunteers have each year. The Dinner is special because it showcases this in so many ways. I don't want my leaving to take away the attention from what we have been trying to do at Cabrini Connections.

So I will say to all of you, "Keep the vision alive. Keep helping each other. Keep in mind that the only way we'll solve any of the problems we face is if each of us says "If it is to be, it is up to me".

Cabrini Connections is available because of the efforts of many volunteers over many years. Some of them have worked hard to find the money needed to operate the program. Over the past few years finding this money has been more difficult and that has led the Board of Directors to think that separating the Tutor/Mentor Connection from Cabrini Connections will give them a simpler story and more ability to raise the needed money.

Raising the money has always been about telling the story of why we are involved and why what we do is important to people who have the ability to give money. If all of you keep doing that you should be able to find enough donors.

I will continue to try to help from my role as leader of the Tutor/Mentor Connection and as a long-term member and supporter of the tutoring/mentoring that has been taking place in Cabrini-Green since 1965.

Congratulations on another year. Good luck in what you do to help each other in the coming years.
Posted by Tutor Mentor Connections on Thursday, June 16, 2011 No comments: Links to this post

Cabrini Connections to be featured on Groupon!

We are excited to announce that Cabrini Connections is going to be featured on Groupon.com with a G-Team campaign for three days, June 7-9! Launched in November of 2008, Groupon is a website that features unbeatable daily deals - 50 to 90% off - on the best local goods, services and cultural events in more than 500 markets and 46 countries worldwide.

G-Team is a community outreach initiative within Groupon that brings communities together to do good, have fun, and make an impact. G-Team has been working in Chicago to help mission-driven organizations like ours raise money and raise awareness, channeling the collective buying power of Groupon followers and our local supporters.

We need your help to make this a successful campaign...

1. Subscribe to Groupon (http://www.groupon.com/subscriptions/new) in Chicago before the campaign launch
2. Check the daily Groupon e-mail to view our campaign, which will be featured along the right hand side of the main deal and under the list of daily deals
3. Support the campaign with a pledge and spread the word to friends and family, encouraging them to do the same

Thank you for your support! Read and share the full announcement on Bradley's blog here: http://bit.ly/k9UZNu
Posted by Bradley Troast on Thursday, June 02, 2011 No comments: Links to this post