This past week, NU alum and Chicago Bear's Linebacker Nick Roach, had a spectacular game versus the Seattle Seahawks. Roach who has stepped into the starting Middle Linebacker role after injuries to Brian Urlacher and Hunter Hillenmeyer early in the season, has stepped up in a huge way. Series after series Nick continued to make key plays that eventually contributed to a Chicago Bear's win.
Nick Roach had a great game on the field, but his determination, hard work, and dedication is setting a gr 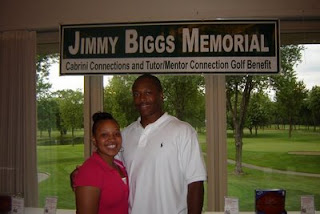 eat example for his fans, especially the Cabrini Connections' youth off the field. Nick Roach attended the Jimmie Biggs Memorial Golf Benefit in July and interacted and engaged with many of the Cabrini Connections' students, staff, volunteers, and guests/supporters of the program, but Nick spent a lot of his time sitting and talking with Savon Clark. Savon is a 9th grader in the program and has dreams of becoming a football player just like Nick. They sat and talked over dinner and Nick not only answered questions that Savon had about school, football, and life, Nick provided Savon with some helpful tips on how he can reach any and all of his goals.
I'm unsure if Mr. Roach took advantage of any tutoring/mentoring program like Cabrini Connections on his road to the NFL, but I'm a 100% he had a network of 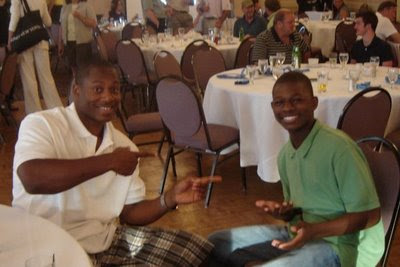 people (mentors) assisting him through throughout his life; providing him with advice, making themselves available when he had questions or concerns, and just supporting him and the decisions he made. And this is exactly what we are trying to provide the youth here at Cabrini Connections so they too can reach their goals, dreams, and aspirations like Nick Roach.
Nick, keep up the great work and please continue to show the youth that are looking up to you how hard work, dedications, commitment, and determination pays off!