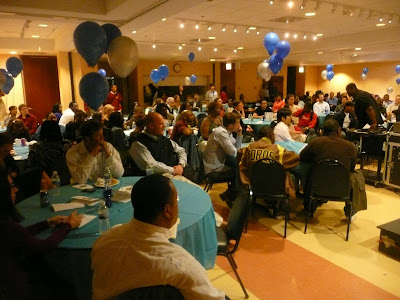 The Cabrini Connections' staff could not have asked for a better ending to the 2008-2009 tutoring/mentoring year! Last Thursday we hosted our annual Year End Dinner, and it was a GREAT event! Not only was the event an overall success, thanks to everyone who came out to support and be a part of the celebration we had a record breaking 200+ in attendance!!!

I want to take the time out right now to thank every student, staff, volunteer, parent/guardian, board member, donor, and guest who made the event possible...and successful! Thank you!
The event started a little different from previous years by starting off with the dinner. As the guests ate and chatted with those around them, we officially kicked off the event with a documentary Cabrini Connections that was a project of the Youth Leadership Council. This documentary not only captured the essence of what Cabrini Connections is all about, but it was a great start to a great event.
Following the documentary, Year End Dinner Coordinator, Courtland Madock and the student emcees led us into the heart of the night. We heard from two of the MANY Cabrini Connections' alumni, Kenneth Chatman and Jonathan Summers. Although both were lost for words at times as they spoke, we appreciate their commitment and dedication to the program and thank them for being willing to share their "Cabrini Connections' story" with us. 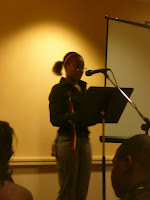 Next we had 8th grader, Ashaunti Roby, who came up and shared a very emotional poem that provided the group with a glimpse of her personal feelings and why she is the strong young woman that she is today! The Writing Club Coordinator (Jen King) and students...and even Dan got into the mix and shared a skit with the crowd. They did a great job and they received a very big applause for their work. Lastly, 6th grader, Ana Tate blessed the crowd with a very inspirational song and Yolanda Hyles, Breonca Hyles, Cierria Tharpe, and Shante Sanders ended the performances with a very nice dance performance.

Following the alumni and the student, several parents who expressed their thoughts about the program and how the program has not only affected their children, but the family as a whole. Mr. Clark (father of Savon Clark), Ms. Rhodes (mother of De'Sean Hale), Ms. Wright (mother of Arden Harris), and Asaca Fisher (aunt of Marquita Fisher) all had nothing but kind words to say about the program, the staff, and how the Cabrini Connections' program is a needed and wanted program for students and family members alike.
Following the speeches, the Cabrini Connections' 2009 graduating class received their Senior Graduation Dollars and a very special gift of a 2008-2009 Year Book. The seniors and their mentors received the very first copies of the year book. The Art Club got into the action as well by raffling off some of the many art pieces that the students have been working on the last couple of months. There were students, parents, board members, volunteers, and many other people who had lucky raffle tickets and received some great art work! 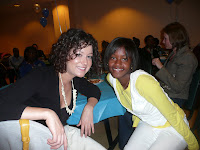 We ended the night on a very positive note, several students earned some much deserved awards.
Most Motivated:
Charles Hill and Dominique Dobbs
Most Improved: 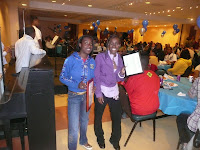 Best Overall Academic Achievement:
Marcus Burks and LaFaye Garth
Jimmy Biggs Citizenship Award:
Savon Clark and Yolanda Hyles
Everybody who made the night and the program possible were recognized and 1st year volunteer Mike Ozmeral was recognized for his fundraising efforts throughout the year. And Mike showed that he truly cares about the program by donating his prize of a gym membership back to the organization as a silent auction item for the annual golf benefit.
We closed with President/CEO and myself not only discussing some of the year's highlights and what it took to make the 2008-2009 a success, but we discussed what it will take to make the next year and the following years be successful as well. We need everybody who is and who could be a part of the Cabrini Connections' family to step up and contribute to the program. From the students, parents, staff, volunteers, donors, board members, to other program supports; we are going to need an even bigger effort from everybody involved to have continued success! 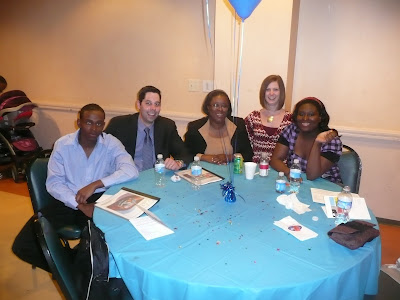