Working During the Bye-Week! 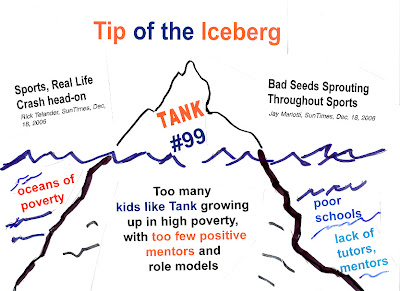 As part of the sport's analogy series I want to continue this week by continuing to give background information about myself and my start with this organization. I have been an athlete nearly my entire life. I have played on numerous basketball, football, and even baseball teams throughout my career. On those teams I found a way to become a leader as a captain of nearly every team that I have been apart of. The hard work that I put into athletics, and lets not forget academics, allowed me to earn and accept a full-scholarship to Northwestern University as a member of the football team. Due to a career ending injury I was unable to display my athletic ability on the football field at Northwestern, but I am able to continue to display my leadership ability in the field of Social Service!

For this week's sport's analogy series I want to discuss some of the events that took place during our bye-week. Last week was the Thanksgiving Holidays (Hope you all had a Happy Thanksgiving) and while some NFL teams played their football game on Thanksgiving, the Cabrini Connections' organization had our bye-week. If you don't know what a bye-week is, this a week in a football team's regular schedule where a football game does not take place, but any and all people who have been apart of any football program in their lives know and understand that even though an actual football game is not played there is always work to be done!
Although we did not have our weekly tutoring sessions last week, the Cabrini Connections' front office, the head coach, and many of the coaching assistants worked hard during this bye-week! Many of the leaders of the Cabrini Connections' team used this opportunity to improve the overall program in a variety of ways. I, along with Assistant Coach Chris Warren, increased our recruiting efforts by calling and visiting schools looking for new players to join our team. Unlike the recruiting and scouting mind set of college and NFL teams, we were not looking for the best players in the school; Chris and I were searching for and recruiting the students/players who can and will benefit greatly from joining the Cabrini Connections' Team!
As the Head Coach I was able take some time to evaluate the program's progress and not just take pride the accomplishments that the team has had thus far, but to locate areas of improvement and put plans together to have successes in those areas as well as the season continues. Some of those plans include better communication between the coaches and the players, more opportunities for the fans (donors and supporters of the program) to get involved, and continued efforts to recruit the right people for the right roles on the team!
I'm sure you all have noticed the picture that I've added this week is different from the previous pictures that accompany these articles, but I've added this one for a special reason. As the title states "Tip of the Iceberg" is usually all that people see when it comes to not just our student/players but many adolescents throughout the Chicago community, and that "Tip of the Iceberg" that people see is very different depending on the player. But one of the similarities that all most all of our players have is the that at the base of the iceberg is the ocean of poverty and poor schools.
You may be wondering how does this "Tip of the Iceberg" picture relate to the Cabrini Connections' team and the title of this article. It's simple, the Cabrini Connections' leaders are doing all that we can to change the tip of the iceberg that people see in our players, and we used the bye-week as an opportunity to make changes to the iceberg picture of our players. Although the Cabrini Connections' coaches can not change the poverty and the poor schools in a weeks' time, but we can continue to recruit special players to our team, connect them with dedicated and committed tutor/mentors to coach them, and provide our players with the opportunity to change the media's perception of their 'Tip of the Iceberg,' and we will continue our efforts from the bye-week and beyond!
Will you join in our efforts?